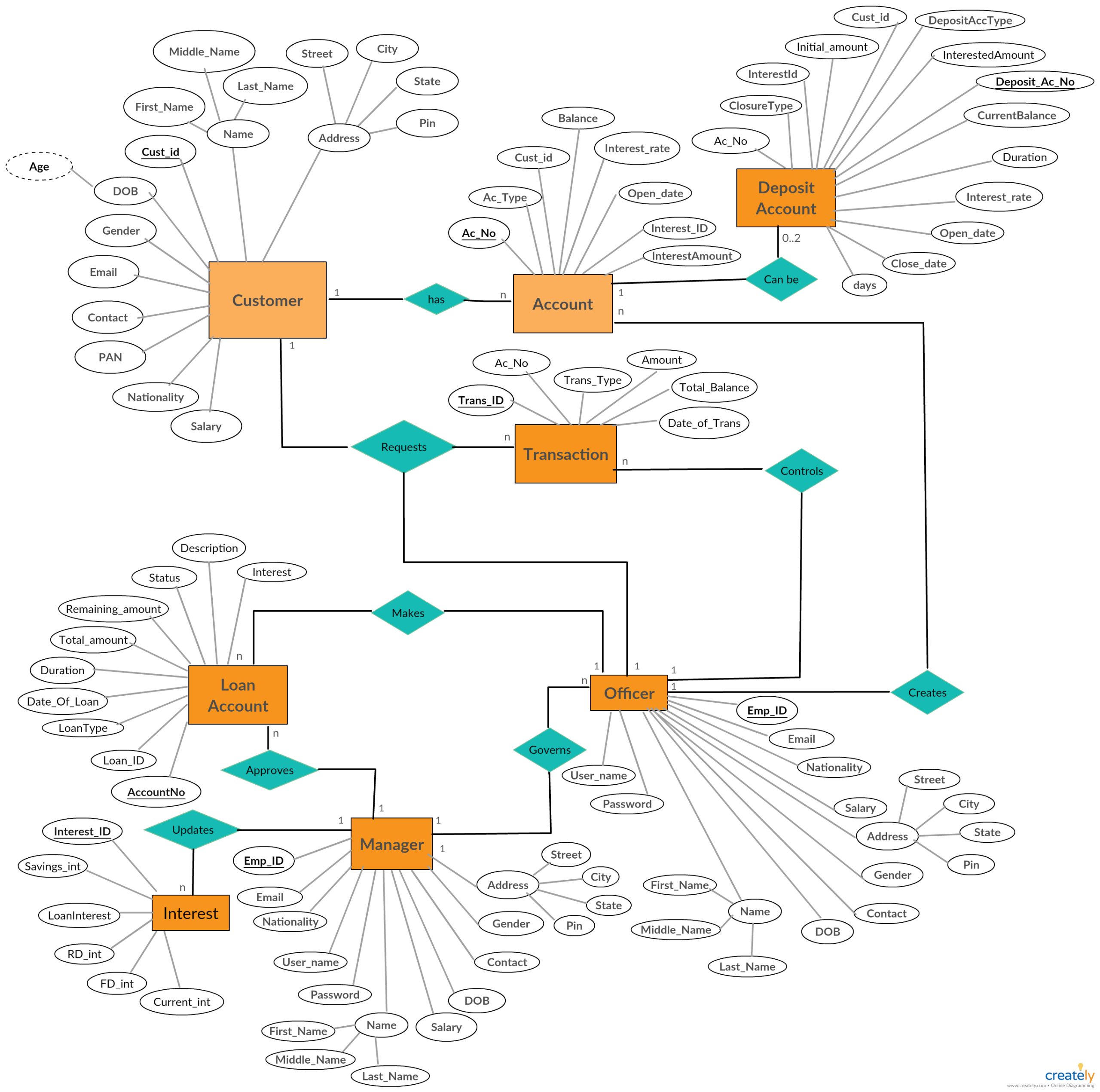 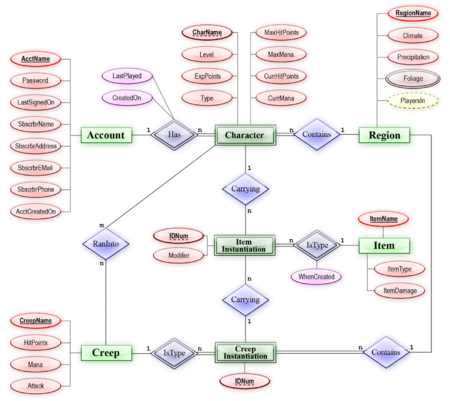 An entity–attribute-relationship diagram for an MMORPG using Chen's notation.

In software engineering, an ER model is commonly formed to represent things a business needs to remember in order to perform business processes. Consequently, the ER model becomes an abstract data model, that defines a data or information structure which can be implemented in a database, typically a relational database.

Entity–relationship modeling was developed for database and design by Peter Chen and published in a 1976 paper,[1] with variants of the idea existing previously.[2] Some ER models show super and subtype entities connected by generalization-specialization relationships,[3] and an ER model can be used also in the specification of domain-specific ontologies.

An E-R model is usually the result of systematic analysis to define and describe what is important to processes in an area of a business. It does not define the business processes; it only presents a business data schema in graphical form. It is usually drawn in a graphical form as boxes (entities) that are connected by lines (relationships) which express the associations and dependencies between entities. An ER model can also be expressed in a verbal form, for example: one building may be divided into zero or more apartments, but one apartment can only be located in one building.

Entities may be characterized not only by relationships, but also by additional properties (attributes), which include identifiers called "primary keys". Diagrams created to represent attributes as well as entities and relationships may be called entity-attribute-relationship diagrams, rather than entity–relationship models.

An ER model is typically implemented as a database. In a simple relational database implementation, each row of a table represents one instance of an entity type, and each field in a table represents an attribute type. In a relational database a relationship between entities is implemented by storing the primary key of one entity as a pointer or "foreign key" in the table of another entity.

There is a tradition for ER/data models to be built at two or three levels of abstraction. Note that the conceptual-logical-physical hierarchy below is used in other kinds of specification, and is different from the three schema approach to software engineering.

The first stage of information system design uses these models during the requirements analysis to describe information needs or the type of information that is to be stored in a database. The data modeling technique can be used to describe any ontology (i.e. an overview and classifications of used terms and their relationships) for a certain area of interest. In the case of the design of an information system that is based on a database, the conceptual data model is, at a later stage (usually called logical design), mapped to a logical data model, such as the relational model; this in turn is mapped to a physical model during physical design. Note that sometimes, both of these phases are referred to as "physical design."

An entity with an attribute

A relationship with an attribute

An entity may be defined as a thing capable of an independent existence that can be uniquely identified. An entity is an abstraction from the complexities of a domain. When we speak of an entity, we normally speak of some aspect of the real world that can be distinguished from other aspects of the real world.[4]

Entities can be thought of as nouns. Examples: a computer, an employee, a song, a mathematical theorem, etc.

Entities and relationships can both have attributes. Examples: an employee entity might have a Social Security Number (SSN) attribute, while a proved relationship may have a date attribute.

All entities except weak entities must have a minimal set of uniquely identifying attributes which may be used as a unique/primary key.

Certain cardinality constraints on relationship sets may be indicated as well.

In Chen's original paper he gives an example of a relationship and its roles. He describes a relationship "marriage" and its two roles "husband" and "wife".

Chen's terminology has also been applied to earlier ideas. The lines, arrows and crow's-feet of some diagrams owes more to the earlier Bachman diagrams than to Chen's relationship diagrams.

Another common extension to Chen's model is to "name" relationships and roles as verbs or phrases.

The use of nouns has direct benefit when generating physical implementations from semantic models. When a person has two relationships with car then it is possible to generate names such as owner_person and driver_person, which are immediately meaningful.[5]

Modifications to the original specification can be beneficial. Chen described look-across cardinalities. As an aside, the Barker–Ellis notation, used in Oracle Designer, uses same-side for minimum cardinality (analogous to optionality) and role, but look-across for maximum cardinality (the crows foot).[clarification needed]

In Merise,[6] Elmasri & Navathe[7] and others[8] there is a preference for same-side for roles and both minimum and maximum cardinalities. Recent researchers (Feinerer,[9] Dullea et al.[10]) have shown that this is more coherent when applied to n-ary relationships of order greater than 2.

In Dullea et al. one reads "A 'look across' notation such as used in the UML does not effectively represent the semantics of participation constraints imposed on relationships where the degree is higher than binary."

In Feinerer it says "Problems arise if we operate under the look-across semantics as used for UML associations. Hartmann[11] investigates this situation and shows how and why different transformations fail." (Although the "reduction" mentioned is spurious as the two diagrams 3.4 and 3.5 are in fact the same) and also "As we will see on the next few pages, the look-across interpretation introduces several difficulties that prevent the extension of simple mechanisms from binary to n-ary associations." 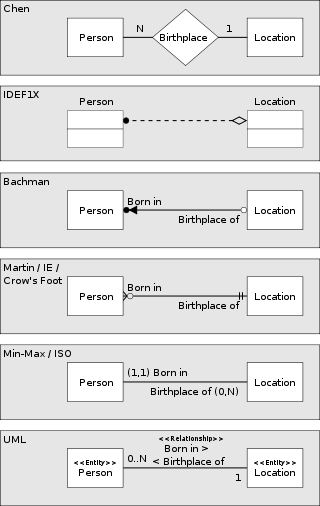 Various methods of representing the same one to many relationship. In each case, the diagram shows the relationship between a person and a place of birth: each person must have been born at one, and only one, location, but each location may have had zero or more people born at it.

Two related entities shown using Crow's Foot notation. In this example, an optional relationship is shown between Artist and Song; the symbols closest to the song entity represents "zero, one, or many", whereas a song has "one and only one" Artist. The former is therefore read as, an Artist (can) perform(s) "zero, one, or many" song(s).

Attributes are drawn as ovals and are connected with a line to exactly one entity or relationship set.

Cardinality constraints are expressed as follows:

Attributes are often omitted as they can clutter up a diagram; other diagram techniques often list entity attributes within the rectangles drawn for entity sets.

Crow's foot notation, the beginning of which dates back to an article by Gordon Everest (1976),[12] is used in Barker's notation, Structured Systems Analysis and Design Method (SSADM) and information technology engineering. Crow's foot diagrams represent entities as boxes, and relationships as lines between the boxes. Different shapes at the ends of these lines represent the relative cardinality of the relationship.

Crow's foot notation was used in the consultancy practice CACI. Many of the consultants at CACI (including Richard Barker) subsequently moved to Oracle UK, where they developed the early versions of Oracle's CASE tools, introducing the notation to a wider audience.

With this notation, relationships cannot have attributes. Where necessary, relationships are promoted to entities in their own right: for example, if it is necessary to capture where and when an artist performed a song, a new entity "performance" is introduced (with attributes reflecting the time and place), and the relationship of an artist to a song becomes an indirect relationship via the performance (artist-performs-performance, performance-features-song).

In using a modeled database, users can encounter two well known issues where the returned results mean something other than the results assumed by the query author.

The first is the 'fan trap'. It occurs with a (master) table that links to multiple tables in a one-to-many relationship. The issue derives its name from the way the model looks when it's drawn in an entity–relationship diagram: the linked tables 'fan out' from the master table. This type of model looks similar to a star schema, a type of model used in data warehouses. When trying to calculate sums over aggregates using standard SQL over the master table, unexpected (and incorrect) results may occur. The solution is to either adjust the model or the SQL. This issue occurs mostly in databases for decision support systems, and software that queries such systems sometimes includes specific methods for handling this issue.

The second issue is a 'chasm trap'. A chasm trap occurs when a model suggests the existence of a relationship between entity types, but the pathway does not exist between certain entity occurrences. For example, a Building has one-or-more Rooms, that hold zero-or-more Computers. One would expect to be able to query the model to see all the Computers in the Building. However, Computers not currently assigned to a Room (because they are under repair or somewhere else) are not shown on the list. Another relation between Building and Computers is needed to capture all the computers in the building. This last modelling issue is the result of a failure to capture all the relationships that exist in the real world in the model. See Entity-Relationship Modelling 2 for details.

A semantic model is a model of concepts, it is sometimes called a "platform independent model". It is an intensional model. At least since Carnap, it is well known that:[13]

"...the full meaning of a concept is constituted by two aspects, its intension and its extension. The first part comprises the embedding of a concept in the world of concepts as a whole, i.e. the totality of all relations to other concepts. The second part establishes the referential meaning of the concept, i.e. its counterpart in the real or in a possible world".

An extensional model is one that maps to the elements of a particular methodology or technology, and is thus a "platform specific model". The UML specification explicitly states that associations in class models are extensional and this is in fact self-evident by considering the extensive array of additional "adornments" provided by the specification over and above those provided by any of the prior candidate "semantic modelling languages"."UML as a Data Modeling Notation, Part 2"

Peter Chen, the father of ER modeling said in his seminal paper:

Chen is in accord with philosophical traditions from the time of the Ancient Greek philosophers: Plato and Aristotle.[19] Plato himself associates knowledge with the apprehension of unchanging Forms (namely, archetypes or abstract representations of the many types of things, and properties) and their relationships to one another.